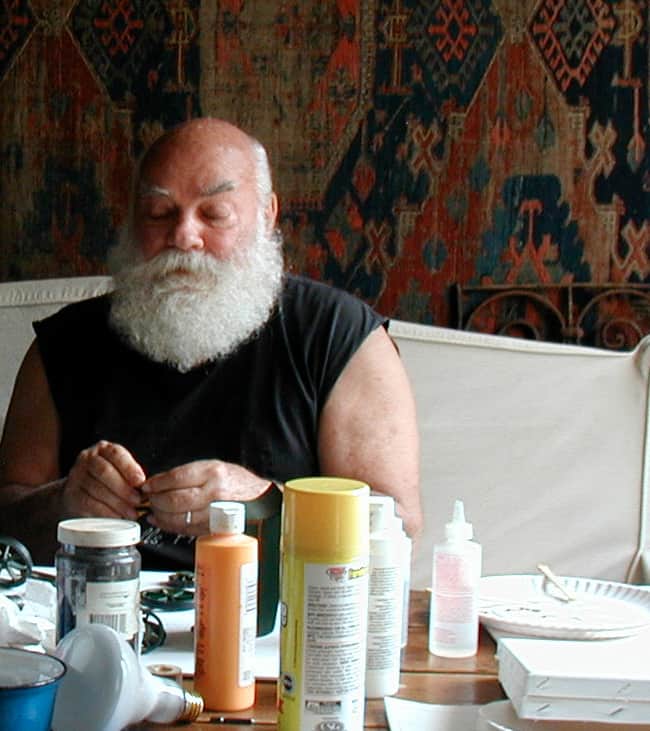 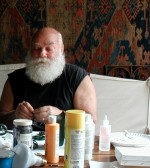 I’ve known Larry Camp since the middle 1980s, and he’s one of the best people I’ve ever known. In my Dear Readers letter for his Goodie, I used 3rd person rather than “I” for reasons I no longer remember. It reads like this:

“In the 80s Romy worked a coffee wagon down by the Battery with a guy named Tony Puma. Tony was a big love and a very good writer. He was also manic-depressive and HIV positive, and in 1989, he died. Larry Camp was Tony’s boyfriend for 11 years, and he’s one of the best people we know in the city. He lives with a big burly dog up an old banister, in a loft full of beautiful objects. Even his bathroom is a reliquary. He’s an excellent painter. He’s taught at good universities. He was teaching at Ohio State when Marsha Tucker put him in the Whitney Biennial in the early 70s, and in 1978 he came to New York on a Ford Foundation grant and never left. Larry restores folk art so remarkable it’s a privilege to see some of it up close. His clients come entirely by word of mouth. He used to bomb around town on a big Harley before it was stolen. He’d ride out to Boonville, Indiana to see his family. When we told him that our friend Barbara (Bobbi Jo) Maier came from Boonville, too, he remembered her as a kid; the same way she remembered him. They’d had the same piano teacher. For decades they lived a few subway stops apart without knowing it; just the kind of secret New York loves to keep, until we stumbled upon it. Larry Camp personifies a distinct hue of the city’s great heart with his adventurous spirit and wonderful appearance. Things happen to Larry. He’s smart, he has an oddball’s sense of humor, and his merry irreverence bubbles into the most contagious giggle in the world. We’re very happy to have him in the Goodie canon.”

If you would like to order this one, you should read it along with Barbara Maier’s. They really do go together, and I will give them both to you for $5 plus $2 postage, within the US. You can use the donate button on the Shop page, which will zoom you right to Paypal. Email me if you’re outside the country.