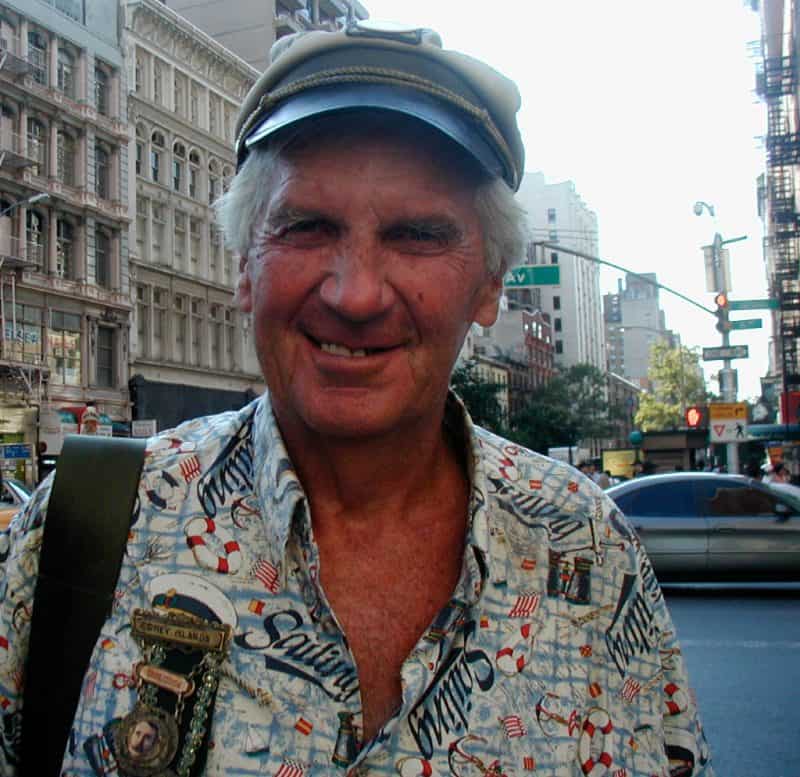 I first met Captain Bob in 2001, after the terrible day of September 11th. He ran a little bar on a barge which sat on the river surrounded by old boats. I had seen him often there, but I hadn’t spoken to him. On September 11th I went over to sit on the lightship Frying Pan, which I did almost every day. Fighter planes circled the island of Manhattan incessantly, and a mushroom cloud stood tall into the sky at the bottom of the island where the terrible thing had happened. Captain Bob had a fire going in a metal drum the way he always did, and on that day people stood around it and Captain Bob said, “I don’t know why we all feel the need to be here right now but we do.” I got to know him after that and from then on I talked to him almost every day. He liked my dog, Pilar, and there is a nice photo of him in his Goodie holding her. I took her with me pretty much everywhere then, the way I take my kitty with me everywhere now, when the weather permits. It’s been a while since I’ve seen Captain Bob, I hope he’s okay wherever he is. Meanwhile, my Dear Readers letter in his Goodie went like this:

It was always so nice to sit atop the lightship Frying Pan at Pier 63 behind the old Baltimore Ohio Railroad terminal and watch the river action, or to stand beside the blazing wood fire tended by Captain Bob. On certain plum evenings Captain Bob might play a crackly old Marlene Dietrich record in the tin-roofed cabana, and imperceptibly, the pier-barge and all the old boats moored around it became more mysterious and beautiful. For a long time we went there every day. There was always something cooking – spuds or burgers or an aromatic soup – over Captain Bob’s fire, fed by scrap wood found by Captain Bob around the neighborhood and hauled back in his green Atomic Speedster wagon. Always in shorts, even on the coldest of winter days, he always knotted around his neck a bright kerchief, and always wore a sea captain’s hat on his head. At Christmastime he made his own sugarplums, and in the summertime he put out bowls of ice cubes for the dogs hanging around. We did this interview early last summer, following Captain Bob around the pier while he worked, and then one day he was suddenly gone. On some authority the tin-topped cabana was shuttered, the fire was put out, and although the old boats remained, the atmosphere was gone. Looking back as we left the pier one evening, we unknowingly took a last glance at Captain Bob in the cabana bar, illuminated by a single bulb, his white captain’s hat glowing as the sun sank across the river and night fell over New Jersey. Then we lost track of him for months. This November we discovered that he hangs out at Coney Island, giving his distinctive brand of guided walking tours and hanging around Surf Avenue in between. We were happy to see him in the chilly wind of the boardwalk still wearing shorts, a colorful kerchief and his captain’s hat. As always, Goodie is short in length but you’ll get the picture, and then you can go find him yourself. As long as there is Captain Bob, there is still a raison d’être.”

You can order Captain Bob’s Goodie here by sending $5.00 via paypal on the Shop page of this web site. That includes postage within the United States. If you are outside the US, please send me an email.