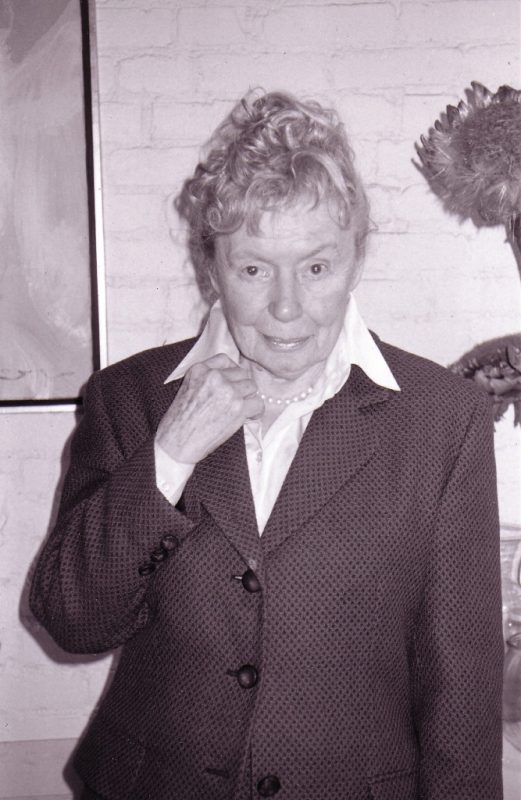 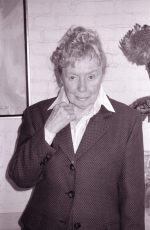 The cover image for Buffie Johnson’s issue of Goodie is a photograph made by Liza Stelle, of a little sculpted person sitting in the window of a long-gone-away shop in the Village. I chose it for the cover image because it seemed like a nice thing to do, since Liza was the one who introduced me to Buffie, some time in the early 1990s. I got to know Buffie quite well, and nobody was sadder than she was when Liza died. I did the interview with Buffie sitting at her kitchen table, her kitty sleeping in its center, surrounded by her paintings. She lived in a big loft on Greene Street, and she loved to tell about how she thought SoHo resembled Paris when she first came (from uptown) in the 1970s. She spent time in Paris before the war, where she met a great many people who were, or would become, well known. My favorite story of Buffie’s from that period was always the one where she pinched Gertrude Stein’s behind. Soon after her Goodie was published, we gave Buffie a lifetime achievement award, with pinching Gertrude right at the top of her achievement list.

From my letter to the readers:

“Above all, Buffie is someone to have a lot of fun with. Just the other night we went out to dinner and on the way she wanted to walk down all the spookiest streets, the darker the better. Those are the streets where she’ll stop to talk to rats and “pidgies”. I’ve seen her with a rat’s full attention, saying, “Are you a rat, Sir? You remind me of a rat I knew when I was a little girl.” Buffie likes to hold hands, have love affairs, and talk about love affairs. She’s traveled the world over, she’s danced with voodoo priestesses in Haiti only to find a tarantula getting into bed with her later in the hotel; she’s entertained famous astronauts; and she still goes to parties and likes to dance. Going out with Buffie is a tonic. Since she’s quite blind, a person blabbing into a cell phone appears to be a sputtering lunatic to her. They look like that to me too, but when Buffie exclaims, “What on earth is that person doing?” I feel the acute pressing of just how valuable she is.”

Buffie left behind a great wealth of paintings when she died in 2006, and some of them are for sale. If you google Buffie Johnson, you’ll find them. If you would like to order a copy of her Goodie, please email me. They are not expensive. You can also visit the shop page of this web site and make a donation using the paypal button, and let me know which issue of Goodie you would like.