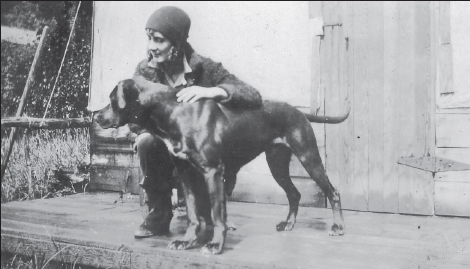 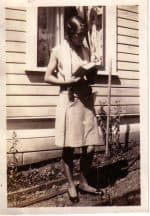 Pete Eggers lived to be 100 years old. She lived on the Oregon Coast, where she was born, and her remarkable memory and eloquence in expressing it allowed glimpses into an American life gone forever. She lived next door to my mother, which is how I came to know her. I spent many wonderful hours next door at Pete’s, listening to her stories and talking with her. She died in 2007, soon after enjoying her 100th birthday party in her home and doing all the cleaning up herself, just as she had planned. Her Goodie is made of stories of the West, at once stately and rustic, and full of Pete’s humor and wonder. She never lost her wonder, even at the edge of 100. She was full of curiosity and amazement to the end. She was a published poet, but she downplayed her achievements. Pete wore overalls before other women even wore dress slacks, yet somehow she always looked glamorous and feminine, no matter what she was wearing.

From my Dear Readers letter in her Goodie: “On this very couch, she says, she used to sit with the love of her life in her arms and he would gaze up at her and they would converse. That was Bumper, the cat she never got over. She’s outlived two good husbands and all of her siblings but her youngest sister. She has one son (“I can’t believe my baby boy is now what I used to think of as an old man!”) and she’s crazy about him. She’s funny and kind of a tomboy. She’s a Western lady. Her manners are exemplary. She talks to and about animals as if they are people. She is an artist by nature and a poet. Her remarkable memory and eloquence in expressing it allows glimpses into an American life gone forever. She’s never been afraid of slogging through the mud and yet she has such class, just naturally.“

You can order a copy of Pete’s Goodie for $5, which includes postage in the US. Use the paypal “donate” button on the Shop page of this web site. I promise you will not be disappointed. You have my word, with a money-back guarantee.