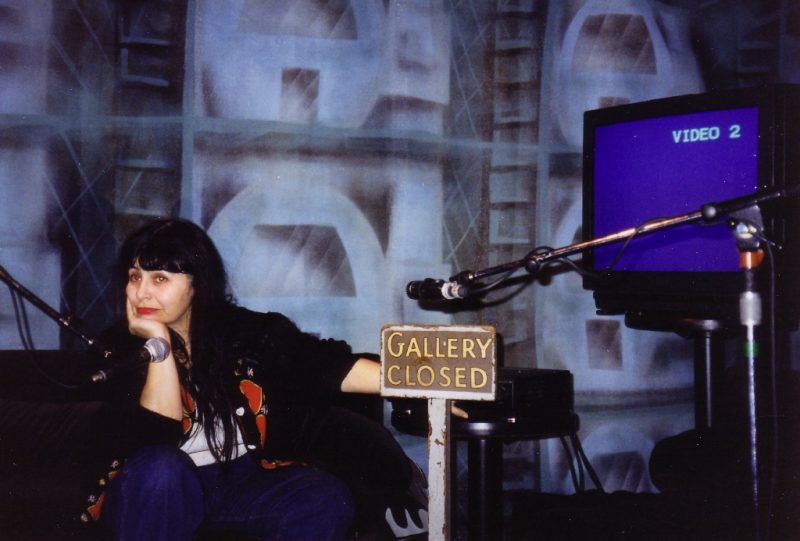 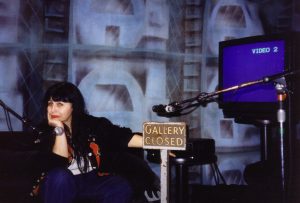 I met Penny for the first time in 1988, the night my friend Liza Stelle took me to St. Mark’s Church to see her perform along with the great Margo Howard-Howard, who Liza knew well. I loved what they did together, with Penny impersonating Margo while Margo impersonated someone else, and after that night I never missed a performance by Penny if she was doing one in New York. I would have wanted to see everything Margo did too, but she died not long after, in some kind of ‘mishap’ at the hospital. I remember Liza telling me that at the hospital Margo had said to the nurse, “You’re not going to do to me what you did to Andy Warhol!” But, Liza added, apparently they did.

Years later, after Goodie had come into being I started bugging Penny to do one.  I had become aware that she’d managed to track down the great Phoolan Devi in India. Vali Myer’s had let me read her copy of Phoolan Devi’s biography, and I was dazzled. Only Penny Arcade could have managed to actually find someone as hard to find as Phoolan Devi, and she not only found her but she won her over completely. One night, while waiting to see a play at La Mama, I introduced Penny to Foxy. And Penny decided at that moment that she would do an interview for Goodie and that she’d like Foxy to do it. A few days later Foxy went to visit Penny, very excited, and Penny filled at least three tapes with stories, which Foxy then gave me to transcribe and edit into a Goodie. Like Ira Cohen, Penny is a superb storyteller with excellent recall and a manner of telling that is entirely her own. When she brought forth family photographs to include with the interview, I was struck by the similarity of her Grandmother Agatina Pieri’s photograph, taken with a cousin, to the photos of lady bandits from Basilicata in an old book I’d bought once in Napoli. We  put one of those bandit photos in the Goodie, which added an extra pinch of well-deserved glamour to Penny’s already marvelous story.

From my letter to the readers in Penny’s Goodie:

“Penny Arcade embodies what is missing in places which are uninteresting and tired. She’s the real thing, the last band of gypsies, the onion seller, the comedienne, the color, the neighborhood character, the storyteller, the corner grocery, the electric Southern preacher who can lift a crowd to its feet shouting hallelujah at the recognition of the truth. Because Penny knows. And what matters to her is important to all of us who value the authenticity we are being almost forced to forget. We love Penny because she’s a flame of truth and providence burning in the murk of an awful lot of bullshit. She’s funny, tragic, brilliant, beautiful, victorious, old fashioned, hep to everything modern, and a champion of other artists to a degree unheard of in the cutthroat world of art. She has a magnetic lure to all that is remarkable, no better example being her meeting with Phoolan Devi, the famous Indian bandit queen. One night in 1988, Penny Arcade performed at Saint Mark’s Church with the legendary Dame Margo Howard-Howard, who came on the downtown scene in the late seventies with Jackie Curtis. If you can find Dame Margo’s book, I Was a White Slave in Harlem, grab it right away. In it you will read about that performance at St. Mark’s Church, a rare night drawn from the New York treasury of eccentric brilliance. Penny is one of the few gold coins left in that now almost bankrupt treasury. ‘New York is Rome,’ John Lennon once said, and as Anna Magnani belonged to Rome, Penny Arcade belongs to New York. She is our Anna Magnani.”

In creating the text for each Goodie, my habit was to have each subject read through the final edit to make sure all was correct, and that they liked it, before it was printed. Making the subject of a Goodie happy was a very big part of what made doing them so rewarding. A lot of of cutting and pasting and moving things around went into the Goodie edits, to make them read smoothly, and I would always worry that I hadn’t done a good enough job. But I never showed a subject my “Dear Readers” letter; that would be a surprise which they would see when they saw the final, finished copy of their Goodie, once Foxy had done her layout and brought the whole thing magically into tangible existence. I always worried a little that the subject might be disappointed by my letter, but no one ever said they were. In 2000 I still had an answering machine, and I wish the tape had not broken so I could hear Penny again the way she sounded when she called to say, “I love my Goodie! I love my Goodie! I love my Goodie!” and then hung up. But at least I remember her saying it, and how very happy it made me that she did.

If you would like to order a copy of Penny’s Goodie, please use the paypal button on the Shop page of this site, or email me. In the US, Goodie is $3.00 plus $2.00 for postage.

Photo of Penny Arcade in 2000 by Romy Ashby