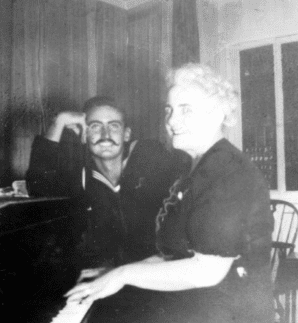 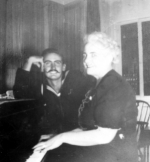 Al Carlin, may he rest in peace, was the father of my friend Marilou, who I met in 1988. While visiting her family on Long Island one day, I was struck by Al’s charm and his storytelling. When Goodie came into existence a decade or so later, his stories still rang in my head. So we went back out to Long Island and interviewed him. I’m happy to know from Marilou that Al kept his Goodie close by for the rest of his life and felt proud of it. It was a joy to do, and I’m so glad we ‘got him.’

My Dear Readers letter for Al:

“We did this interview back in the Spring and it is the last one we have finished from before September 11th, 2001. Had we interviewed Al Carlin after that, this would no doubt have been a very different interview. Anyone’s would be, but Al spent his working years as a New York City Fireman in the Fire Department’s Marine Division. He personifies the John J. Harvey, a decommissioned fireboat with a long history, old, handsome and noble, residing in the wonderful gypsy camp of old boats at the Lackawanna Barge off 23rd Street on the West Side. It is our favorite spot in New York. Both Al and the old boat have white, salty-dog beards. On September 11th, that boat was brought back into service and taken downtown to act as a floating fire hydrant to keep water from the Hudson flowing towards the horrible fire. We have no doubt that had he been asked, Al would have gone back into service himself on that day. Al personifies not just a romantic old fireboat, but a romantic New York almost lost to memory. When he talks, you see pictures of what New York was like in the thirties and forties. Al is twinkly, a bit the wiseacre, loveable, and he looks like a marine fireman. He looks like someone you’d see sitting between Popeye and Brutus down at the Blarney Castle. We can only imagine how many firemen he knows who lost their lives in this. A fireman by definition is a Goodie. So are fire trucks and firehouses, fire hoses and fire hydrants. They are all not only essential guardians, but part of a traditional and old-fashioned New York still in existence. We took a Goodie check to the firehouse across the street from St. Francis of Assisi, where Father Judge lived, before he died on September 11th while giving last rights to a fireman. That money is from Goodie readers, so it is a gift from you all. We hope you will be comforted by meeting Al, and that you will enjoy our little interview. We are glad that we have it now, rather than before, and hope it brings a feeling of familiarity with all NYC firefighters.”

Order Al’s Goodie with the paypal button on the Shop page on this site. Goodies are $3.00 plus $2.00 for postage in the US.