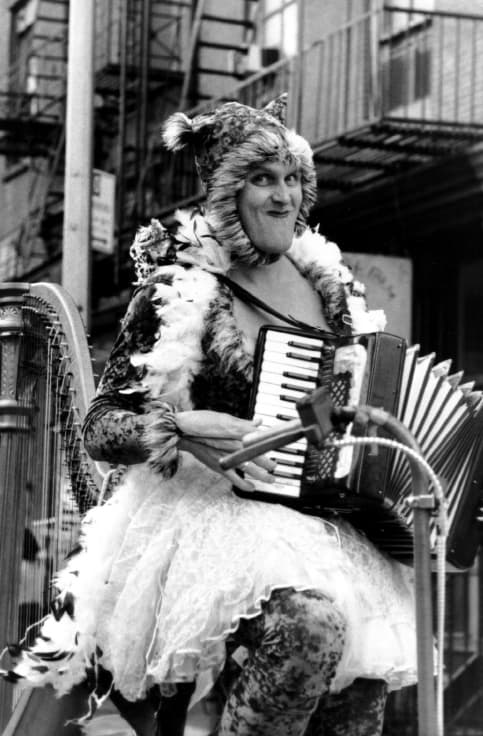 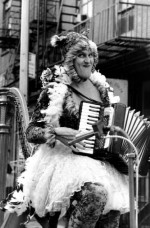 I can’t think of anyone who dressed up the streets of New York better than Baby Dee did once upon a time, as she rolled through the neighborhoods on her harpcycle playing her accordion.  My Dear Readers letter from her Goodie:

“We were thinking, ‘Gee, what shall we send out for Christmas?’ It has to be something delightful and illusory, something of romantic literature, psychedelic, full of guardian angels and sinister aspects, as good as the secret of the Indian rope trick. So we decided to invoke through a reminder, in case the rivers of your imaginations are swollen with other concerns, someone we all miss very much, who for a few years put our streets in wonderland. Remember Baby Dee? There was just no sight more glamorous than that of Baby Dee’s harpcycle rumbling over the glistening cobbled streets of the meatpacking district and parking outside the velvet ropes of Mother. Baby Dee often performed there, where her fairy kitty accordion was the sugarplum of the Jackie Christmas Show. Baby Dee! Undocumented creature of mysterious light! She’s a storybook, she’s gold leaf, she’s the breath of all the oldest church organs, she’s feisty, she’s a genie, she’s a pussycat, she’s ivy and wild roses, she’s a flame in the darkness, she’s night! And then she had gone, as if slipped through a portal in one of those wonderful wicked streets and transported to another world. Sometimes we would hear bits of news of Baby Dee and understand that she had gone with the traveling freak shows through the deep fogs of Scotland and all the pretty broken glass of Paris and Amsterdam. But we missed her and kept wondering, and finally, we found her. She gave us permission to print an old interview we had done, which we have included here along with a little new one, done over the ether in an unusual method of Goodiemaking. We hope you will rush to buy Baby Dee’s CD, and we wish you happy hearts at the end of this year 2001.”

If you would like a copy of Baby Dee’s Goodie, use the paypal button on the Shop page of this site. $5.00 includes postage in the United States.